Last year the fruit count from M.’s asian pear tree was in the low single digits, which didn’t really matter, because what pears there were tasted like sawdust. For reasons best known to the tree, it burst forth with a branch-bowing crop this year. Unfortunately, the flavor was still in the wood by-product range.
M. held out hope that at least some of the fruit would turn out to be delectable, but with no external indicators, what were we supposed to do? Pluck, chomp, spit, toss and pluck again? I couldn’t bear the prospect of watching all that bounty slowly shrivel and brown as fall progressed. Figuring that a heavy application of sugar, spices and boiling could beat even the most recalcitrant pear into submission, I decided to make applesauce-but-with-asian-pears. Having consulted my 1973 Better Homes and Gardens Home Canning Cookbook (“Each recipe is tested for family appeal, practicality, and deliciousness”) and determined that fruit sauce could be home canned without special equipment.
Good thing it came out tasty because I ended up with TWO GALLONS. As in, I filled the 12 pack of pint jars and then some. 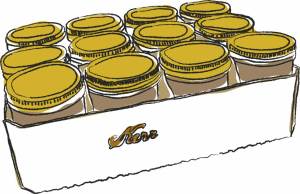 Was it worth it? I guess so. If you discount the cost of the jars, which I plan on reusing, the whole shebang required maybe $2.00 of ingredients. So…a dollar a gallon…cheaper than milk! Cheaper than gasoline! On the other hand, I spent a lot of time peeling and slicing when I could have been doing something useful like sewing. On the other other hand, I was able to use pear processing as an excuse to watch some dramatic episodes of The West Wing on DVD. On the other other other hand, I don’t normally ever purchase or eat applesauce-type products, so it’s not as though I saved myself any money at the checkstand. It’ll taste good on the latkes come Hanukkah though!
Anyway, here’s my “recipe,” if you can even call it that:
Ingredients:
A overflowing grocery bag of free asian pears
A lot of brown sugar
Several tablespoons of cinnamon
Several tablespoons of ground ginger
A few teaspoons of cloves, nutmeg, whatever
Magic ingredient:
A few teaspoons of ground pepper

Make sure you have a BIG pot. Spend a painful amount of time peeling, coring and chopping the fruit. Put it in the big pot with all the other stuff plus about 4 cups of water. Boil and stir. Maybe add some more water. Boil it some more. Taste a little bit and add more spices and sugar to your taste. Keep boiling until the fruit is really soft and falling apart. It takes over an hour. Turn off the stove. In batches, puree about 2/3 of the stew in a blender. Mix all back up in the pot. You have sauce! Now either have a sauce eating party with all your friends or freeze or can the fruits (ha ha!) of your labor.