My next door/upstairs neighbors just pulled out their tomato plants last weekend. I gave mine the heave-ho a few weeks ago. There were a few infant fruits still clinging to the vines, but with the days shortening ominously there wasn’t much chance of them progressing beyond the green marble stage.
In any case, I had wee plants to plant. 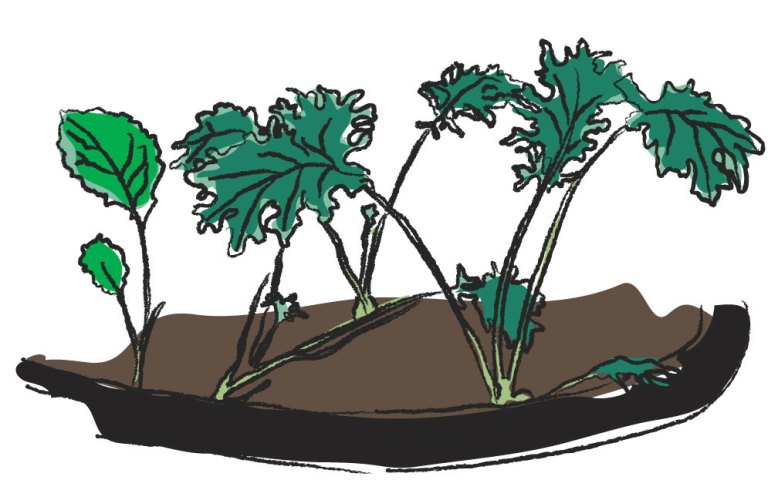 When it come to leafy things like kale, spinach and their ilk, I prefer to start things from seed. Needless to say, one reason for that is because I’m CHEAP. Why pay $3.00 for a 6-pack of chard seedlings when you could get about a zillion chard seeds (or as I like to look at it, a zillion chard plants) for the same price?
But it’s more than penny pinching. Call me a sap, but I’m still bowled over by the Miracle of Life, the thrill of passing bare, flat dirt on my way out the front door, and the same day coming home to the tiniest nub of green peeking out.
I started starting seeds in 6-packs for fall/winter mid-September, and most of those–rainbow chard, beet greens, dinosaur kale and mustard, have moved into the pots previously occupied by basil and eggplant. Between the shortening days and my ever-busier schedule I’ve been coming home and leaving in the dark a lot lately, and the cooler, foggy weather has made watering less urgent. As a result, I’ve gone days without paying much attention to my crops. Yesterday I had to dash home at lunch was amazed by how big everything had gotten. Except for the things that had been consumed by snails…sigh. The arugula is out of control (and probably painfully bitter, though I’ll eat it anyway), the peas are halfway up the tomato cages, and after weeks of anemic growth the lettuce sprouts are busting out all over. Sometime this weekend I’ll have to carve out an hour or two to reshuffle and get things in bigger pots and in the ground. And all those empty 6-packs will give me an excuse to plant some more seeds. Kale for Christmas, everybody!